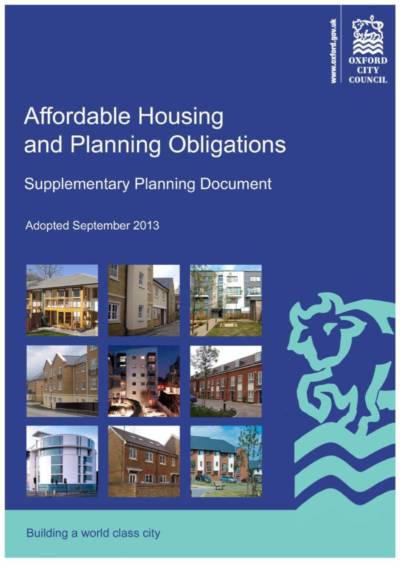 Following a review by two Local Plan Inspectors, Oxford City Council are set to abolish planning policy which commits developers to make affordable housing contributions on sites of between 4 and 9 units.

The controversial policy was introduced as part of the 2013 Affordable Housing and Planning Obligations SPD. The Council had sought to carry the policy through to the emerging Local Plan 2036, although the rephrasing of guidance relating to affordable housing contributions in the most recent publication of the National Planning Policy Framework (NPPF) appear to question the policies soundness.

Provision of affordable housing should not be sought for residential developments that are not major developments (10 units or more). NPPF 2019.

The Council had cited Oxford’s acute affordable housing need as reason enough to keep the local policy. However, in light of the amendments to the NPPF, the Inspectors said:

The Council are set to challenge the decision with the Leader of the City Council, Councillor Susan Brown, writing to the Secretary of State for Housing, Communities and Local Government, Robert Jenrick MP, to call for the Government’s NPPF to be amended to enable the City Council to reintroduce its developer contribution policy.

Although the long-term future of the policy is unclear, the immediate aftermath suggests that in the short term the Council will no longer be able to claim affordable housing contributions on development of between 4 and 9 units – a point highlighted by appeal APP/G3110/W/18/3213179 for demolition of vacant former MOT facility (Class B2) and the erection of 6no. flats (Use Class C3), associated landscaping and ancillary works.

Edgars welcome anyone looking to further understand the ramifications of this move, or wishing to discuss potential development opportunities as a result to contact as.